Emyvale is over 3000 years old - a Bronze Age tomb was discovered here in 1959. Unfortunately, the urn and other artefacts found were inadvertently destroyed.
The first inhabitants of Emyvale were of the Ui Meith tribe, hence the name of Emy. However in the 8th century the McKenna Clan arrived and by the 12th century they had established an independent little ‘tuath’ or kingdom in North Monaghan, which would last for the next 500 years.

The McKenna Logo, which is also the McKenna Coat of Arms, shows the Hunter on horseback; his two faithful Hounds; a Stag; Two crescent moons - indicating the two days and nights that McKenna pursued the huge deer.

Legend tells us that McKenna came from Meath on a hunting expedition as he followed a stag for two days and two nights and eventually killed the prey at Liskenna in the Barony of Truagh. He fell in love with the daughter of Treanor and settled here. 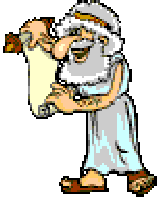 The McKenna Headquarters was at Tully Fort and Crannog, 1Km east of Emyvale, on the road to Glaslough, and these fortifications remained in position until they were completely destroyed in three successive English invasions - in 1602 (following the defeat at Kinsale), in 1642 and in 1643. Their final defeat came at the Battle of Drumbanagher (near Glaslough) in March 1688.

Todays ‘Clann McKenna’ hold International Clan Gatherings every second year - the last one was held this year ------ 2008 in Canada. 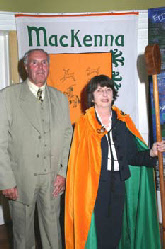 Mr. Bennie McKenna, Chairman of Clan McKenna, with the  Chilean Ambassador to Ireland, Cecelia McKenna, who was elected Chieftain of the McKenna Clan in 2004.

See photos of her visits to Monaghan HERE

Clan McKenna enter the Village of Emyvale during the 2004 Clann McKenna Rally. 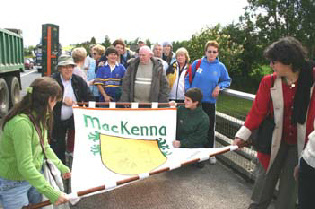 More on the McKenna’s HERE