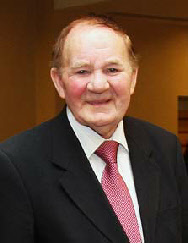 Dan Rogan R.I.P. Glaslough: It is with great sadness that I report the death of Dan Rogan, Glaslough. The news of his death was not unexpected as he has been in failing health for some time and was aware of the seriousness of his condition. Indeed the last time we had a chat he was very blunt in speaking of his illness but was determined to fight it to the end. My memories of Dan go back many years to the time he came to Emyvale and became Sergeant of the Garda. It was he who stopped me at the Garda Station on the 14th August 1964 and asked me to go to Emy Lake where, he said, someone was drowning.

Dan and I have been close friends over the years since and I always respected him for the manner in which he carried out his duties as a Garda. In that work he displayed a great sensitivity towards people and it was no wonder that he became a champion of those with special needs and did so much work in the development of services for them. The independent accommodation and independent living now available is a result of his continuous and persistent efforts over many years. He never gave up hope of achieving his aims and when last we spoke he still had so much to do and so many plans to see fulfilled. The late Benny McKenna had structured the Christmas Day swim at Emy, raising large amounts of funds for various charities. When he passed away Dan and the Friends of the Mentally Handicapped took over the organising of the event and continued the great tradition. When Dan asked one to do something he could not be refused and his plans always came together with a very successful outcome. Dan was also very involved with many other community projects and was always willing to give more of his time, energy, expertise, and experience for the benefit of his fellow man. May God reward him now for his good works while among us. He will be sadly missed by the community at large and by his family in particular. To them we offer our deepest sympathy. His Requiem Mass was in St. Mary's Church, Glennan, Glaslough, on Sunday, November 6th at 10am. May he rest in Peace. Home Above is photo of Dan with the outgoing President of Ireland on one of his proud days - the opening of the Special Accommodation at Millbrook, Milltown, Monaghan., The second photo was taken during another big day in his life - the huge Conference on Inclusion, which he helped to organise in the Hillgrove Hotel on the 27th March 2009, and the third was at Emy Lake on a cold Christmas day for the swim. 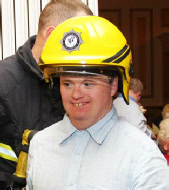 The sad news continues to dominate in the North Monaghan area with the news on Friday, Nov 11th of the death of Justin Rogan R.I.P. Just one week after the passing of his father Dan (See down this page). Justin has been ill for some months and was being treated in a Dublin hospital and was unable to attend the funeral of his father. Indeed he and his father were in Dublin hospitals at the same time. This is a terrible blow to the family coming as it does so quickly after Dan's death. Justin was a very independent person despite his special needs and he was a prominent figure in the area and among his friends in the Arch Club. He was a Eucharist Minister in St. Mary's Church, Glennan, and always offered his services to the priest on his arrival at the chapel. He loved fun and socialising and he endeared himself to people all over the county and beyond. His many friends will mourn his loss and miss him from their company. His funeral Mass and burial took place on Sunday, November 13th in St. Mary's, Glennan.