Last Saturday 5th April, women candidates for the local elections and women of all ages from around the county attended the first Monaghan 5050 Group meeting of the year to talk about the issues affecting their local communities, women’s role in public life and the upcoming local elections. The event was hosted and organised by Monaghan 5050 Group, a voluntary organisation based in Monaghan town, affiliated to the 5050 Group nationwide.

Chairperson of Monaghan 5050 Group, Fiona McCaffrey Jones, welcomed everyone to the event and explained that “The 5050 Group is campaigning to encourage and support more women in politics and public life. The new gender quota legislation, which will ensure more women candidates, does not take effect until the 2016 general election. However the impact of the legislation is beginning to be felt. Across the country so far, almost 25% of all local election candidates are women; this compares with 17% five years ago in 2009.

The 5050 Group plans to observe the progress of the local elections as political parties and independents gear up for the campaign trail and the elections in May and to encourage and support the election of women”.

“The aim of this meeting is to celebrate and support the women candidates selected so far, to inform people about the changes to local government and of the importance of using their vote and, crucially, to allow women at grassroots level in their communities to share their issues with the candidates”, explained Ms McCaffrey Jones.

Local Government Reform & Local Elections
Gretta McCarron, from Monaghan 5050 Group, outlined local government reform which is expected to be completed by 1st July 2014. Thanks to Monaghan Community Forum for this concise outline of the changes.

Doorstep Issues & Grassroots Issues
The issues the candidates come across on the doorsteps can be broadly broken down into local and national. Local issues include potholes, planning permission for pathways, security for elderly people and commercial rates. National issues include LPT, water rates, the unfairness of the SUSI grant system, inadequate broadband throughout the county, the need to create jobs, mortgage arrears and the withdrawl of medical cards from the over 70s.
Some of the issues raised by women at the meeting included the following:

Finance Briefing
Elaine Clerkin from Fix-Your-Finance, briefed the candidates on the type of issues she deals with on a daily basis. Ms Clerkin is a Qualified Financial Advisor who had been working with people in mortgage arrears and debt for the past 2 years. In her experience the new insolvency service and bankruptcy has had little affect on ordinary people due to the high costs associated with each of these procedures. Ms Clerkin also explained that mortgage banks are more willing to offer debt restructure arrangements to people in mortgage arrears than other financial institutions, including credit unions, which surprised most people at the meeting. She reminded the candidates to advise people that whereas MABS was established to assist people whose total debt was under €20,000, they should seek the assistance of a registered Qualified Financial Advisor or mortgage centre for mortgage arrears and larger debts. Ms Clerkin commended the candidates for the sympathetic way they deal with constituents in financial difficulties and she asked them to always encourage people to keep the lines of communication open with their lenders.

Emergency Accommodation
Councillor Ciara McPhillips advised people in dire need to contact the social worker appointed by Monaghan County Council if they require emergency accommodation. This is a service for people who face the prospect of repossession. Cllr. McPhillips emphasised the importance of early contact and alluded to the Council's connections with Focus Ireland through which a raft of supports are available. To contact Monaghan County Council office call 047 30500

Register To Vote! And Use Your Vote!
To check if you are on the register of electors contact Monaghan County Council on 047 30500. Local elections often have a low voter turn out but if you care about your community you should come out on the 23rd may and use your vote.

Lolita Reid from the Lithuanian community informed the meeting that some of her compatriots were having problems getting on the register of electors, even though, as EU citizens they are entitled to vote in local elections. Monaghan 5050 Group will follow up this issue on her behalf.

Outreach
If there are community groups around Co Monaghan that would like us to visit their area to provide information on the local elections and local government reform please contact us by email: monaghanwomenwthts@yahoo.ie or via Facebook-Monaghan-Women-Want-To-Have-Their-Say or talk to Fiona, Gretta or Lynn when you meet us out and about.

Entertainment
A big thank you to Dara MacGabhainn and the musicians from MOPOSOG for providing music and song. We all thoroughly enjoyed it.

Thank You
Thank you to all the women who came out on Saturday and best of luck to all the women candidates in the local elections. Monaghan 5050 Group is a voluntary organisation and is very grateful to Monaghan County Council for the funding received through its Community Fund which made this event possible. 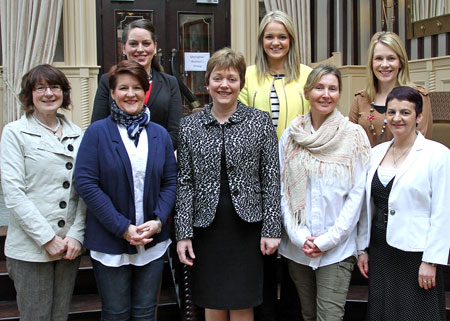 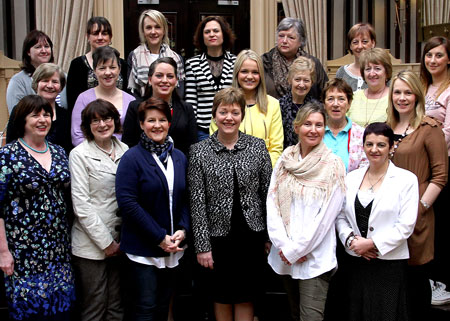